Woo! Sunshine! I even went out in it earlier - hurrah for the lake over the road. Quietly sitting on a bench for a while was lovely.

I've been more unwell than usual, which is basically my own fault but is still unpleasant. Yesterday was particularly awful with fainting and vomiting and the like (not blogged about that yet. Will do as soon as it has properly passed).
As a result I've not really had anything in me to do anything.

So here are some links:

I'm pretty sure you'll all have seen this before but it is SO CUTE: Torchwood Babiez The sad Dalek in one of the later pages is one of the cutest things ever and baby Jack on top of the wendyhouse? Awesome!

Game of Thrones given the go ahead for a second season. Woo! Not that I've SEEN the first episode yet - that will probably happen later tonight. i'm just excited that it's supposed to be good!

Poly in Pictures is a webcomic. The subject matter is described in the title. There are too many excellent strips in it for me to share all my favourites with you, so I'll leave you to discover them for yourselves.

And finally, a picture: 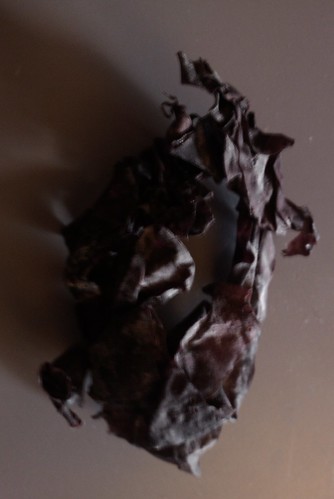 This is Dulse.
Dulse seems to be a kind of seaweed. It's purple and tastes a bit like a cross between pu ehr tea and beef jerky with a LOT salt thrown in. It's odd but I like it.
Collapse