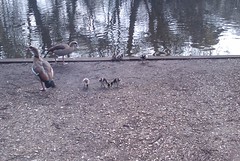 Here are the baby things, goslings to be precise, that

freedrinkdave and I went to visit earlier. Are the cuties? :)

The responses so far lead to an overwhelming win for the Ice Cream tea for the I in my name so we're going to consider than one sorted. T'other letters still to be determined.

If you haven't stated your views - whether you're going to attend, know anything about tea or not - then pop over to the original post, peruse the list and leave a comment!

Right. At my Pirates vs Tea birthday party I want to make life a little easier for people and offer a limited selection of teas - people tend to get all over choiced and wuss out from decision making when faced with all of them.

I've decided that I shall pull out seven teas of different types that spell out my name: C H R I S T Y for those not in the know (and unable to extrapolate from the post title)

The Y will most definitely be Yunnan, not just because it's currently the only Y I have but also because China black teas are my most favourite. Nom.

For the others I'm not sure. Except for leaning towards the Houchiga Oolong for the H.

Can you have a looksie and see if anything jumps out at you? Either because you know it's yum or because the name tickles your fancy or for whatever other reason you can think of providing you explain said reason in the comments.

So. What do people think? Tell me what you think and if we can get a short list I'll do a poll for the final answers.

I went all quiet again.

I had everal weeks of feeling really rubbish and not having the wherewithal to put words together. Hopefully that's over now as I have THINGS I wish to say. Well, type. Not right now but soon.

How are you all?

Whilst at my mummy’s house last month I watched an old Elvis film.
I used to LOVE Elvis when I was a little girl, triggered by whatever film channel Cartoon Network turned into at 9 having an Elivs-a-thon one New Year’s Eve where I saw Flaming Star and Harum Scarum and part of Fun in Acapulco. After that I demanded all the Elvis videos my family possessed and must have watched G I Blues, Fun in Acapulco and Blue Hawaii until the tapes wore out and the entire family were more than sick of them.
I’d also watch any that happened to be on TV (when I knew about them) and listened to the tapes and records that were hanging around the house (possibly mummy’s originally, tis in the before time now so I do not do remembering very well) to death. I believe I’d evolved some elaborate fantasy where Elvis had been kidnapped by aliens and brought back to earth as his younger self and had fallen in love with the glamorous teenager (hah!) I was sure I would become. Somehow this actually seemed plausible.

If you could revisit the showboat a year down the line you'd likely find that things were in more or less the same state as they started in, as riddled by jealousy as ever due to batting around the symptoms rather than dealing with the cause.

Valentines is one of those weird holidays that seems to mean something completely different to everyone I talk to.
At worst it's crass commercialism rolled up with some sort of weird popularity contest. At best it's a chance to show someone you care about them, anonymously if you so wish.
I'm going to go with the latter meaning and THEN I'll make it all easy for you to tell me how you love me and I'm awesomesauce by setting up a Valtinr:

See? Ecologically friendly!
Now, tell me you love me :)

Go here to have a chance to win some of Twinings new Sunshine Grey tea by sharing the little joys of life.

I've been a bit all over the place recently. This is partly because I've been feeling more ill than usual and partly due to all the weird stuff going on.

I was obviously out of my mind with worry concerned about

jantshira as she was in Egypt but she arrived back in the country after an emergency evacuation on Tuesday which lead to me spending most of Tuesday afternoon and WEdnesday crying in relief due to the emotional fallout and being all ill and stuff.

The ESA saga now being sorted out - after some confusion where they sent me three contradictory letters all with the same date on them - I've managed to pay some bills and buy some food and relax a bit about the whole being completely penniless thing.

As I've been feeling a bit worse than usual I've not been able to drink any caffeine without feel really sick and headachey so I'm mostly on fruit juice and caffeine free tea - this is AWFUL! I hate not being able to drink tea. Grrrr at it!

Had a long chat with my manager when I handed my last sicknote in and feel happier about how things are going there. Hopefully I'll be able to go back there. Fingers crossed on that one.

I'll try make my next post a little bit more exciting than this one :) 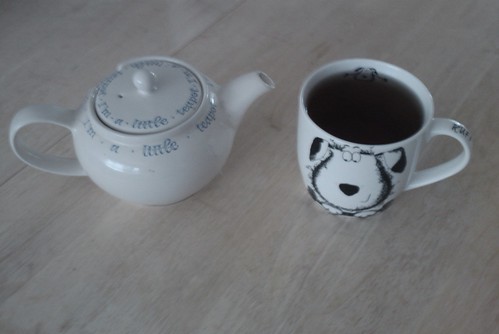 Want some more free tea samples? Twinings send out samples of some of their blends so you can give those a go too :)

On Boxing Day our oven broke. This was, as I'm sure you can imagine, as annoying as hell. As we're renting this meant that we weren't actually able to do anything without permission from the landlord who we can't directly contact.
We called the letting agents but as it was bank holiday there was no answer, and no emergency number, so we emailed them. They didn't get back to us until after David had called them again, as it turns out they are in the process of being taking over by another letting agents and our broken oven had slipped under the radar.
They duly called the landlord who said he needed to decide whether to fix it or get a new oven. After a week David called them back again and they prodded the landlord who agreed to let and engineer come round.
On Wednesday said engineer came around and had it fixed within half an hour. Woo! Working oven! Boo, three weeks without one but as the hob, grill and george foreman were all still working we weren't without cooking appliances, I was just getting baking withdrawal symptoms.

I did make lots of new things whilst it was out of action though.
( Collapse )

picturing_food the other day. Hopefully they'll be yummy!
Collapse